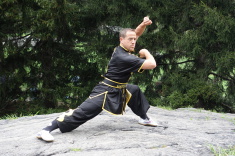 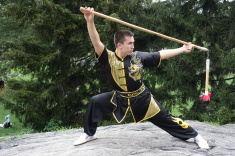 Christian Downes is a nineteen-year old engineering student at New York University in New York City. He was born and raised in New York and lives with his parents and sister in Queens, NY. Christian has been practicing Kung Fu at the Shaolin Temple in New York since he was seven years old. Christian teaches Kung Fu to children as part of a cultural program for the Chinese Cultural Association of Long Island, NY on the weekends and he teaches Kung Fu in a summer camp program for the Asian American Coalition for Education in Queens. Christian participates in Kung Fu performances with the New York Shaolin Temple throughout the New York, New Jersey, and Connecticut areas. In these performances, Christian performs Monkey fist, Two-sectional Staff and Double Spear form. （纽约总部，NY）

David Fung is a 35th generation Shaolin disciple, given the name Heng Tong. He has trained in martial arts since the age of 12. He has experience in contemporary and traditional Shaolin kung fu, qi gong, and tae kwon do. He holds black belts in taekwondo and has trained in several of the arts of Shaolin including san da (boxing), chin na (grappling), and iron body, specializing in Zen finger and diamond finger. David has trained under 34th generation disciples Master Guolin and Master Chao Hai of the Shaolin Temple. David's expertise in the physical aspects of martial arts are balanced by his training and certification in Shaolin philosophy and history.

David is a member of the Shaolin Temple Overseas Headquarters Performance Team and a company member of the performing arts troupe DCNY and has performed martial arts demonstrations at many different events and locations internationally and around New York tri-state area. Some notable venues include the United Nations, the Chinese Embassy, Caesar's Casino, and the Met. David has judged and competed in several international martial arts tournaments with first place finishes, and has worked on martial arts choreography with different groups, including Madonna and Theatre Group Dzieci. David also teaches at the New York Chinese Cultural Center. （纽约总部，NY） 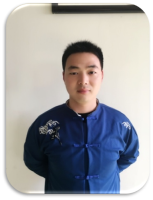