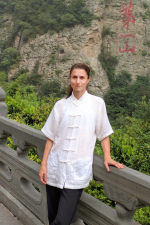 Born and raised in Switzerland, she came to the USA to attend the Savannah College of Art and Design. She's been working professionally for 20 years in Feature Animation and has worked on 7 Motion Pictures. Since 2003 she's been working as a Lead Materials Technical Director at the Oscar nominated company Blue Sky Studios. She also has shared her knowledge of animation by teaching classes at NYU as well as SVA in New York. In 2012 and 2015 she was nominated for an award from the Visual Effect Society in LA for some of her character work on the movies Rio and Rio 2. She's been practicing Yoga for many years, becoming an RTY 200 Certified teacher in 2017. However, Kung Fu is her true passion in life. In 2014 at the Dragon Tiger Cup and in 2015 at the ICMAC Competition she won a gold medal for her broadsword form. In general, she tries to give equal time to the study of the internal and the external art of Kung Fu using it as a complete system. For her Kung Fu is a way of life, a way of studying and understanding the body and mind. （纽约总部，NY） 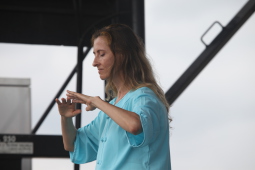 She is the 35 generation disciple and is interested in Qi Gong and meditation. She finds this practice very helpful while maintaining a peaceful state of mind and appropriate energy level throughout the day. This skill is necessary during her demanding job as a college teacher and researcher, where she teaches mathematics and manages multiple duties as a mentor of students research projects. Małgorzata has been helping teaching Qi Gong classes at the Shaolin Temple Kung Fu Center. （纽约总部，NY）