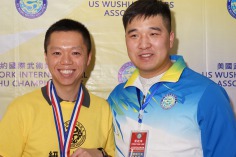 I want to share my perspective on motivation as a parent, as an adult, and as a student. I could go on to talk about what I think are the benefits of practicing Shaolin (I’ll be referring Shaolin as the martial arts, and not the school or the temple) and why I believe my son should learn it, but I’ll save those topics for another day. Quite frankly, I was not a very dedicated student myself. I started and stopped, and started again on more than one occasion. Like many adults and parents, life became busy.

As I grew up in the states, I have always wanted to be part of the popular crowd with the cool kids in school. I mean, who doesn’t want to be friends with the popular kids? (Perhaps you were the popular kid, and I applaud you). I came to be friends with two really cool guys, and they were trained in Shaolin martial arts. So naturally I thought to myself, if I want to be cool like them, I need to learn Shaolin. With no time to waste, I signed up for the intense summer camp at the Shaolin headquarter in Flushing that same year. And that’s how I started- my motivation, my inspiration, and my beginning.

Perhaps not the proudest thing to admit. But I’m going to tell you it doesn’t matter how it all started, what matters is that I started and I learned something valuable that I come to appreciate even today. Did I end up being a really cool guy? Well, I became a dad. Enough said.

So the moral of the story is that if you want your kids to learn Shaolin, you don’t need to tell them about any health benefits or how they could defend themselves. Just point to them the cool kids in school and tell them this will make you as one of those popular kids. --- I hope you know I’m just kidding, right?

My son, Ryan, is 9 years old and he has been coming to class for over 2 years. He doesn’t have time to come often each week. Kids these days are busier than ever with school and extracurricular activities. As you could imagine, I had a difficult time in the beginning when Ryan just started learning kung fu. He was lost. He felt it was too hard. He couldn’t keep up with the classes. His legs were tired. He didn’t know why he need to learn it. He whined and he cried. I could see that Ryan lacked motivation.

I did my best as a parent to guide Ryan and support him. I am a big believer of teaching by example, and there is no better example than the father, me. So, I started class again. I helped him at home. I talked to him about what I learned and what I understand about Shaolin. I practiced with him. I reminded him of the lessons that Shifu taught all the students. Sooner or later, my enthusiasm spread to him. He developed an interest in learning forms. He made friends in the class. He started to show improvement. He became willing to go to class.

I am proud of Ryan, regardless if he is good or not at martial arts. I’m proud to see him practice hard for the wushu competitions, proud that he takes his classes more seriously, and proud that he has shown improvement over time. He has gotten confident and comfortable enough that he is willing to audition for his elementary school’s talent show by performing Shaolin martial arts.

I hope my experiences would give all parents something to consider when they need to find a way to motivate their kids to learn martial arts, or just about anything. We have the responsibility to guide our kids. It’s like how we teach our kids how to walk. We hold on to their little hands when they take their baby steps. Soon enough, they will be able to run on their own. Kids often need someone to help them find their focus. I suggest to all the parents that when talking alone is not enough to motivate your kids, be an example for them and also learn it for yourself. If they see you try hard, they are more willing to do the same.