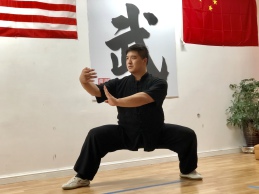 Chaohai grew up in a martial arts family which has an over one hundred year relationship with the Shaolin Temple. He studied Shaolin martial arts with his grandfather, Youren Gao and uncle, Hengsong Sun since he was five years old. He ahs learned Iron Body (金钟罩铁布衫), Damo Nine-Step Zhuigong (达摩九步追功), Double Sticks (梢子棍), Da Hong Fist (大洪拳) and others.

In June 2004, Chahai was invited by the Lincoln Center to the United States to demonstrate wushu. After that on 2004 to the present, Chaohai was invited to participate in over thousands of small and large-scale events, led a team to participate in more than 500 performances and competitions and has taught more than 3,000 students. He and his team have received numerous praises and awards. Behind all the accomplishments there is endless hard work and persistence and wushu provides support through if all. Chaohai once said: “Only after a fall can one really appreciate the happiness brought on by success; only after a rejection can one understand that self confidence is very important; only after being questioned again and again can one realize the importance of upholding a belief.” In the martial arts path, he teaches what he has learned. He hopes that his students will all be better than him and become confident, good-natured and continue the values that he has learned.